I'll let one of my students tell you the story of this project:

It all started on a Monday morning around 9:05 a.m when the class decided to go for a walk in and around the school. That’s when I felt I was surrounded by conics, but not just ellipse there were also parabolas and hyperbola. I felt a bit overwhelmed because I had never seen so many conics on a single walk in my whole life. I was down stairs in the field house when I saw the perfect conic. I cried at the first sight because it was so beautiful. There the conic was on the side of a vending machine; it was a Pepsi symbol was a circle. Once this breath-taking picture was captured I immediately sent it to [student email]. Next I open this amazing program called Geogebra. I pasted the picture and made it transparent so I could see the graph in order to plot point on the circle. Next after I plotted my points I figured out the key information to making the equation for the circle. I founded the center was (0,0), and the radius was perfect two which worked out perfectly for me. Once I had the center and the radius of the circle I was ready to form an equation for this conic. I Enter the equation (X^2/4)+(Y^2/4)=1 and turns out I was right on the money, which made me feel like I actually understood something for once.


AP Exams interrupted class for two days so I knew I needed something that would be beneficial for the students in class, but that the students in exams could do on their own.  A quick search led me to this awesome project.  Monday we spent some time wandering the school taking pictures.  Some days it's annoying that everyone in class has their phone out, but that day I appreciated just how easy it was to say "okay class, photo scavenger hunt!" and they all had cameras at the ready.  The gym was the best place because the basketball court is covered with conic sections.  Students couldn't find any hyperbolas, so they grabbed some ropes and tried to make one.  An unintended bonus of this project was the discussions that came up about curvature.  Telling the difference between a parabola and a semi-circle was a challenge and many students held the misconception that they could make a parabola fit a semi-circle.  Students were also upset if their circular object came out elliptical because of the angle they took the photograph.  All great concepts to work out. 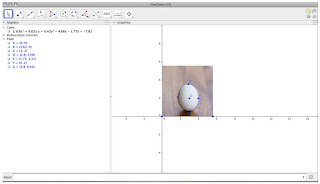 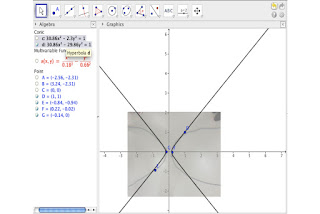 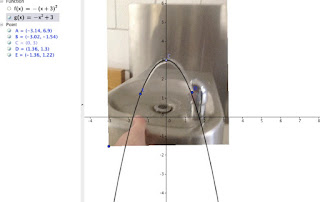 On Monday I gave everyone handouts and the week before students made dichotomous keys which told them how to write equations, but at the beginning of class on Friday everyone started with just their computers.  They whined and complained.  They demanded help with tiny things. They could not believe I would make them use decimals rather than round to the nearest whole number. They basically threw teenage temper tantrums.  I was more helpful than normal since there were only seven students but I finally realized what I was doing, sat down and refused to help anyone until they had the relevant papers on their desk.  One by one, students learned to work in GeoGebra and realized the task was just like what we were doing the previous class.  Soon, everyone was focused and quiet.  One student requested music and we turned on the bachata pandora station.  They helped each other and most had finished the project by the end of class, after admitting it was a fun assignment.  The next class went much smoother thanks to my realization that being less helpful was the key to everyone’s sanity.

Other things to note: 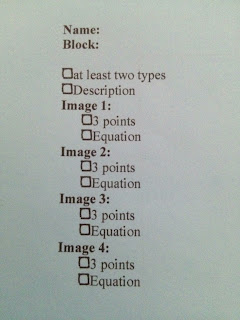