I introduced conic sections with Paper Folding.  After some searching I took bits and pieces from a couple activities (doc and pdf, respectively) to create my handout.

I folded some samples to make sure it would work.  I found that I didn't need too many folds so long as they were well spaced along the line/circle.  It's tough to write in pencil on wax paper, sharpie works much better (especially if you want to photograph your work).  I didn't show students the models ahead of time because that would give away the surprise!  But they were handy to compare the shape of my ellipse with someone else's to see how moving the focus effects the curve. 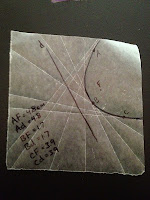 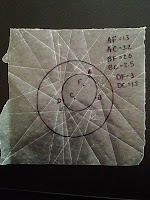 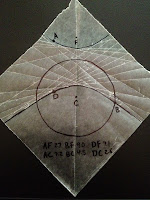 Patty paper is awesome if you have it.  I somehow don't have any so I just used wax paper.  Everyone gets a large section of wax paper to cut into fourths.  That gives them one extra because mistakes happen (and you can't erase creases) and some students wanted to fold another ellipse with the focus in a different location to see exactly what would happen.

Since kids didn't know what shapes they were looking for, they needed more folds than I did.  And then once they got started, some students were really ambitious and kept going until they got beautifully smooth curves. 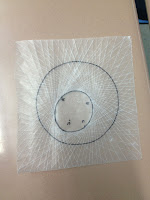 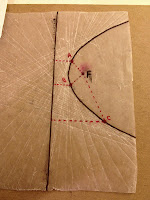 Students started the packet in class and finished it for homework.  They didn't always see the relationship and most students had a hard time figuring out and/or phrasing why the relationship was true, but those questions made for good class discussions.  Since I recommended a size for the circle students noticed that their sum/difference was the same as their neighbors which was a nice segue into the realization that the radius was relevant.  I'm not sure if having the same radius makes this fact more or less obvious.  Thoughts?

The last question asks "Why conics?" and students said "cones...? I have no idea!"  In one class I started by drawing a cone, then gave up and had everyone visualize a cone which I mimed slicing.  They still weren't getting it so I did some searching and found this interactive applet.  When I showed it everyone said "aha!"  Armed with this information, I started with the applet in my other class, but they gave me the same blank stares the first group had pre-applet.  I switched over to having them visualizing while I drew each slice and everyone said "aha!"  I'm not entirely sure what the moral of this story is.  Be flexible, have lots of tricks up your sleeve because it will take several explanations to get the idea across to everyone?  Maybe the moral of the story is really that I need a solid cone with velcro slices.  Does anyone sell such a thing?

Next up: equations!
Posted by Tina Cardone