Most Successful Review Day Yet!

Today we reviewed for a test on triangles and I changed the format just a bit.  For a test on multiple topics I find that working through stations works best, but students don't always work at the same pace and some students need some extra motivation, especially on a Friday after our first full week of school in I can't remember how long.  So, here was the set up:

2 stations were proofs (using proof cards and writing on the desks in dry erase markers).

1 station was a matching activity on the smart board (types of triangles slide 6).

I had students move the desks into groups of 4 and put the supplies for each station on a different set of desks.  Each station had a clear picture frame with the name of the station on the front (ex: Proof 1) and the instructions on the back (complete 2 proofs or solve 6 problems).

Students were to work through the stations at their own pace.  The first person to complete each of the proof stations and the smart board station got a special privilege: they were given a stamp and charged with the responsibility of stamping each person's paper who completed that station.  This did a few things: it gave the fastest students an extra responsibility which kept them busy, it freed me up from checking those stations since they didn't end up with anything on paper and students were excited to earn stamps!  I was worried going in that this would be chaotic, the stampers wouldn't take the responsibility seriously and that not a lot of learning would happen.  I was wrong.  The students with the stamps were helping other students earn the stamps, giving helpful hints but not the answers.  One student even brought problems from the other stations to his station so he was always available (this same kid said "just send me to the office" last class when I asked him to stop talking!).  They worked together on the problems and no one threw a fit when I suggested asking their question of other people at their table rather than asking me.

As students finished the stations they handed in their paper (complete with 3 kinds of stamps and the problems from the other stations) and were given the choice of doing make up work or playing Taboo.  This turned into another great motivator as students wanted to check their grades but I told them they needed a minimum of 5 stations completed before I would discuss missing work with them. 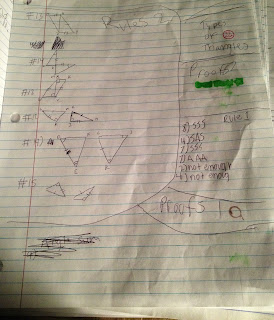 At the end of class I was shocked how quickly time had passed, how quiet they'd been and how I'd never felt overwhelmed by everyone asking for help.  This class has 28 students so even on days when they're focused it's busy.  A few students were absent today, but the ones who were absent were students who always work independently, so it was something about this activity that kept them so quiet and focused.  No guarantees it will work again, but I'm really happy with how today went.  I hope you can have an equally successful review day in the future!

p.s. This post is quite momentous.  It's the last day of November and I managed 23 posts this month, not the 30 I set out for, but more than twice as many as my most prolific month prior to this one.  This is also post #100!  In elementary school we used to celebrate 100 day with sets of 100 things, I remember bringing in 100 shells one year.  So here's 100 dots from this awesome factorization diagram. 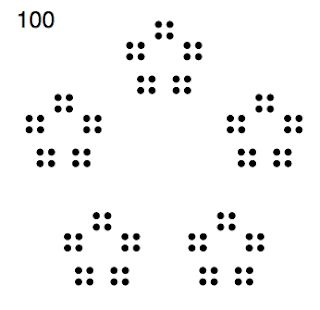