My take on proof blocks was a success!  Last week I outlined my plan and asked for feedback.  Then on Friday I made some on the fly adjustments and was quite pleased with the result:

I printed all the cards on yellow paper (with the intention of printing the triangle cards on a different color - thanks to Justin for that comment), cut them out, asked the librarian very nicely to laminate all 240 of them (16 per pair), asked some students to cut those and sorted them.

I asked students to come up with ways we know to proves lines are parallel, angles are congruent or angles are supplementary.  We made a list as a class that 'just happened to' match up really nicely with the cards (obviously I set this up, but so much of teaching seems magical from the student perspective).

I showed them the cards, with the hints on the back, and talked about the difference between a to:__, from:__ card and a to/from card (without using the word biconditional, but I might have said converse since we've used that term).

I realized that the desks are dry-erase (awesome feature!) so I had kids working in pairs, desks cleared except the cards and a dry erase marker.  Everyone found their Given card and wrote down the given information next to it.  Then I suggested that they look for cards about angles since the proof was just about angles (another suggestion from Justin) and set them loose to figure out the rest.  Some students quickly noticed vertical angles and made the correct conclusion, other students saw the vertical angles but didn't know what to do - I was able to direct them toward the back of the card which made them realize they could now state the angles were congruent.  I cut this first proof a bit short (maybe half the class had the entire proof done) so that we could model on the board exactly how to set it up, and how to write QED (which I loosely translated as "I proved it!").  Then I put a new proof up and set students loose again.  Once a pair finished a proof to their satisfaction they wrote it down on paper and I put up another which the rest of the class got to at their own pace.  Repeat until the end of class. 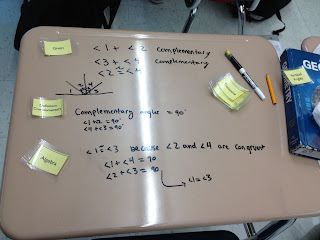 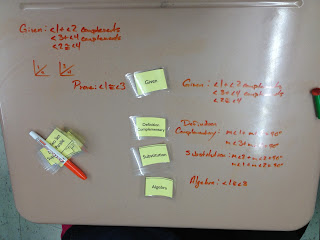 I wish that the Given card was a different color to make it easy to find.  That might happen when I make the next set.

I love that students are willing to take more risks on dry-erase, but it's important for them to have something to refer back to while doing their homework.  Writing it down after wasn't ideal though since their desk was covered with information.  Maybe next time I'll just promise to post pictures on the website for them to refer to?  One of the students whose proof I photographed was really proud I wanted to record his work!

Edited 10/21 at 9 pm to add:
I had students write in their journals whether or not the cards were helpful and why, here are a few responses

Email ThisBlogThis!Share to TwitterShare to FacebookShare to Pinterest
Labels: Geometry