In March I'd bought some yarn and was looking up crochet patterns. I came across fiddle mats for people with dementia. I wondered whether my friends with toddlers would like such things, and then I wondered if I could make it a mathematical play thing. Turned out I could! A math play mat includes a ten frame, a rekenrek (or is it a pair of rekenreks?) and a pocket full of felt shapes. My beta testers have found lots of great ways to play, and made one request for a change to version 2. 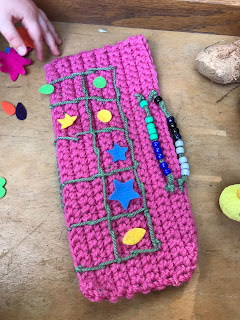 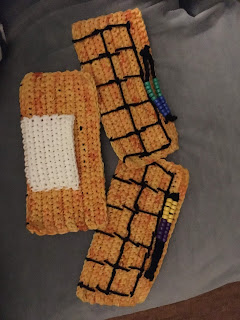 I'm so glad I made these because I got to play math with littles. I learned that I am sorely lacking giggles in my life. I played on the floor of a conference center, at a cafe, and in a living room. So I can attest to the fact that these are great portable toys. Soraya, Jenna, and I played for almost an hour and only stopped because we wanted to go to the park before it rained. She played more, and in different ways the very next day. I love it when the best case scenario you imagine is surpassed by reality!

The things they've played:
At one point Soraya made a joke that turned into a pattern. She announced she was going to make groups of four. So she put one shape down in the ten frame saying “one.” Then she put another shape down and said “four!” And giggled. This small human who's still working out how the numbers go after 10 knew full well that saying four after one was unexpected and would make us laugh. So of course Jenna and I laughed! And Soraya continued saying one then four until she was laughing so hard she couldn’t talk. It was adorable, I'm grinning just remembering it. And it gets better! When we recovered from laughing, Jenna and I got instructions to make new number patterns. I was supposed to say one, then say fifteen, as I put shapes in the squares. Jenna and I started strategically picking shapes to go with the numbers we were supposed to say (like green for one and yellow for fifteen). Soraya picked up on what we were doing and made lots of rules.

The one complaint:
Jenn's kiddo, Z, kept asking her to cut off the beads so she could make more patterns. While I won't remove them entirely, because I'm confident eventually Z will find cool things to do with them, I do want to make them less floppy so they won't get in the way. Added bonus: they're currently made by threading beads onto braided yarn which is omg so tedious. My upgrade is to use pipe cleaners which will make my life so much easier! Plus it's easy for adults to take the pipe cleaners off the mat if anyone else demands it and then put them back later.

Can you see the concentration? These people are doing math. (Z, Soraya, and Shelby's kiddo)

Trajectories:
I would love to see what happens with these toys at different ages. The difference between an almost 3 year old and an almost 3.5 year old was noticeable (yes, I know, tiny sample size). While I'm no expert in the trajectory of learning to count, I have done enough reading about it to know that the answers to all of these questions are different:


Seeing where kids are and how they grow is so fun. Another place for growth was one kiddo could find me a square, and could find me a green shape, but finding a green square was too much. I hadn't thought about how much harder searching for two characteristics simultaneously was until I was gifted a green shape that wasn't a square!

“Mama mama! I neeed you to tell me where you put the present from your friend Miss Tina! I NEEED to make the patterns!”

So what's next? I'm definitely going to try the pipe cleaner method for the rekenreks, and I'm playing with different methods to get the ten frame on there because sewing isn't my favorite and I'd like that part to look cleaner. If I can come up with a quick way to outline the ten frame and attach the rekenreks then I'd love to make a whole bunch of these and bring them to something like toddler play time at the library. I could also send them to you, dear reader, if you have a kiddo in your life, a classroom full of them, or you're a kid at heart. Because lets be honest sensory play with felt shapes is fun for everyone! I do recommend playing together though, as the potential for giggles is much higher. And we could all use more giggles in our life.

Update: my new version worked out so there's now a website for these things: tinacardone.com/math-play-mat
Posted by Tina Cardone

Email ThisBlogThis!Share to TwitterShare to FacebookShare to Pinterest
Labels: play