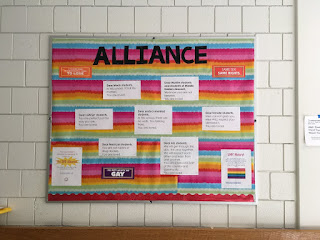 I threw a big enough fit about some vandalism on my bulletin board (quotes from GLSEN if the photo is hard to see or you want your own poster) and now I have an awesome opportunity:
30-45 minutes with staff Wednesday to prep them for advisory Thursday
30 minutes with students in groups of 15-20 Thursday (we have a weekly advisory period used for a variety of purposes)

The vandalism has mostly been someone adding another paper saying "dear white students, you're not racists." So I want to provide everyone an opportunity to talk about identity, privilege and labels.

I just found out this morning that I will have time next week so this post is mostly me organizing my thoughts but I'm absolutely looking for feedback. I'm honored to take on this task but also recognize that I have more privilege than most of my students as do most of the staff, so I want to take on this task carefully.

Step 1: I took this buzzfeed survey and deleted some so it fits on one piece of paper (double sided). I mostly deleted the ones that didn't apply to high schoolers but also deleted the ones that were too straightforward (I am white. I am heterosexual) because I'm trying to be as non-confrontational as possible while confronting privilege. (relevant Twitter convo)

Plan: take the survey (both in the staff training and the student advisory). During the staff training give them a couple minutes in silence and then a few minutes to talk at their tables. Have them write questions and concerns on sticky notes. Whole staff discussion easily derails so I think I'll attempt to limit it. Make some slides with guidelines:

If kids say "that doesn't actually happen!" while reading the checklist calmly respond "it does" and otherwise maintain general quiet during survey time. Once students are done with the checklist staff should invite students to share things they notice or wonder. Instruct staff to limit their own interference in discussion, let the kids speak. They should allow students to share their personal experiences but do not ask anyone to speak for one of their identities. Acknowledge that having privilege can feel uncomfortable - there's no need to feel defensive or guilty. You didn't choose most aspects of your identity and no one is blaming or accusing you of being racist. We are asking you to stop and consider what someone else's experience is like. Address any of the sticky notes that weren't covered in that outline.

Step 2: Many of those statements might seem small, but having your identity criticized, called out or belittled isn't okay. Microaggressions as mosquito bites video. Allow staff to discuss at table and write questions/comments on stickies. Allow students to discuss.

Step 3: Teach the word intersectionality. People have many identities, they might experience privilege in some areas but not in others. Talk about how to use privilege where you have it.

Step 4: Equity vs. equality definitions. We are in the process of becoming a sanctuary city so it would be nice to work that in too. Day of silence announcement.

How long is 30 minutes? If advisors and kids are having a good discussion the survey could be a 30 minute activity. If not hopefully a good set of slides will get students thinking about these important ideas even if advisory isn't the ideal platform for conversation. I'll definitely address the vandalism with the staff but I don't want to make the advisory about responding to an issue. We talk about different things every week so they don't need a reason for this discussion.
Posted by Tina Cardone

Email ThisBlogThis!Share to TwitterShare to FacebookShare to Pinterest
Labels: Advocacy