I teach four geometry classes which are almost entirely comprised of sophomores.  Mid-May of sophomore year marks the point when everyone takes the state test in math.  I should say now that the MCAS isn't a terrible test.  In Massachusetts we have multiple choice, short answer and open response questions.  I rarely read a question and think "what a terrible question" or "that's a mean trick to play."  The multiple choice range from easy to difficult and the open response range from easy to difficult within the same question, which is awesome.  Every one of my students is able to answer part a) of every open response since it's usually very concrete; that low-threshold to high-ceiling nature within the problem is what I strive for in my classroom and it means that students usually do try the open response.  There is a requirement to explain your answer (showing work is an acceptable explanation) which echoes my emphasis on reasoning and justification.  Plus, you only need to get 17 points out of a possible 60-something to "pass."  So overall?  The test isn't terrible, unreasonable or insurmountable.

All that said, the first two weeks of May are still my least favorite weeks of the entire school year.  Why?  Because there's still a month of school and so we haven't gotten to circles or 3-D, I have to make a decision of what to rush through and what to take a gamble on skipping.  Last year I skipped circles and it showed up as an open response on the test (although I think it was a pilot question since they didn't include it in the released test- anyone know if that's valid reasoning?).  We rush through volume and surface area, by which I mean: I handed them the formula sheet and called it a matching game.  I hate doing that, but given time restraints I didn't have a choice.  Over the summer I plan on aligning to the common core standards and I'm hoping that will allow me to shuffle units in a way that surface area and volume get some quality time.  It's also frustrating that students have to take the test as sophomores since so much of the test is on Algebra.  While we use some Algebra in Geometry, there's quite a bit that needs refreshing.

Regardless of the pros and cons of the test, the students have to take it and since they take it my year, review falls on me.  So, here's what we do:

Over 4-5 classes, for the last 30 minutes (of our 90 minute blocks) they independently work on a complete practice test.  I refuse to answer any questions until after they have completed the test (real testing situation) and I instruct them to mark each answer they are confident about with a :) and each guess with a ?.  I check their answers as soon as they've finished a section, but I refuse until they have an answer for every multiple choice question.  It shocked me how many students were unwilling to guess- there's no penalty and a 25% chance of getting it right!  I wanted them to mark their answers so they could see if they were under or over confident (and not feel bad about getting something wrong if it was a guess).  For all of my other assignments, the deadline for corrections is the end of the quarter but I wanted them to be ready before the test, so they were welcome to correct as many times as they wanted- up to May 15 (the quarter won't end until June 20).

For the other hour of the class we had a different focus each day.  We spent one day on surface area and volume.  I cut up a whole pile of questions and instructed them to set up each problem.  They needed to: read the problem, identify the correct formula(s), write the formula(s) exactly as they were written on the reference sheet and then substitute in the given values.  No solving required!  The purpose of this activity was to read the problems carefully and expose them to a lot of problems.  Many of them get bogged down in the algebra which is okay on the test when you only have a few problems of this type, but the goal of the day was to see so many questions that they fit a pattern and looking at the reference sheet was an automatic reaction.  (Method taken from my Useful PD)

Another day I took last year's entire test (2 copies to have plenty of problems), sorted them by type, set up stations and sent students around the room to do at least 4 of each type.  There was also an extra-practice station where I included a list of all the topics that had been on recent tests and asked them to choose 4 that they needed to review.  I had a pile of questions to pull from and made some up on the spot.

I also asked students what topics they needed to review at the end of each class, based on the practice test they were taking.  I used those lists to come up with other problems to discuss, and methods to review for the other days.

The last class before the test I stopped 30 minutes early for a pep-talk and a confidence boosting activity.  I informed all of them exactly how few questions they needed to get right to pass- so no pressure, expressed my total confidence that they could all do part a) of every open response, reiterated the fact that they should write down something for every question- whether it was their gut instinct on a multiple choice or just writing down the given information and maybe a formula on the open response (that's actually worth a point!).  And then I announced the corny activity that I took from misscalcul8. Since I didn't have the time (or the patience, lets be honest, by this time I was spent) to handwrite each poster like she did, I printed a grid that said "I'm a fan of ____" in each box.  All the students names for a class were filled in, along with any teachers in that class.  Students filled in the boxes with something positive, cut out their boxes and made piles for each student.  By the end I figured out the best way to make the piles is to lay out all the posters alphabetically and have the students pile the small pieces of paper on top of the poster.  Then my co-teacher and I spent a lot of quality time with our glue sticks.  We had students write the names in big letters across the poster and I printed the boxes on colorful paper so in the end they looked rather awesome if I do say so myself.  I distributed the posters at breakfast on the first day of the test so they started the day reading all sorts of great things about themselves.  While I announced it as a corny activity and I got some groans and "we have to write something about everyone??" they really understood the purpose and the other students in the cafeteria were asking about them with interest.

I won't know until next year how well any of this really worked, but as much as I hate test-prep, this process wasn't awful, and I rewarded all of us with several fun activities (including dilating comics which they did immediately after the test).  Plus, I get to look at these wonderful posters every day! 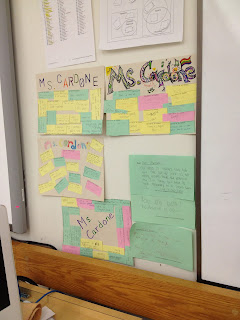 Email ThisBlogThis!Share to TwitterShare to FacebookShare to Pinterest
Labels: Teaching_Practices