Yesterday I went to a barbecue at my friend's house. A friend who has kids ages 7 and 9. So I brought along some math play mats and pattern blocks. The 9 year old had a friend over and they spent most of the day inside - he asked what the pattern blocks were when he came out to eat but I decided to prioritize food over math play at that moment, and then he disappeared before I could invite him to play after dinner. The 7 year old and I had a great time playing though.

As soon as I dumped out the pattern blocks she started building things. At one point she told me to make a big shape out of small shapes. So I made a square composed of 4 squares. Then she said I needed to use more than 8 shapes, so of course I made something using exactly 8. She counted the pieces in my design and said, "No, MORE than 8!" In addition to testing her definition of "more than 8" I also tested her definition of "shape." I wondered if she'd restrict me to mathematical shapes she knew the name for, but a house was fine for her definition of shape. It did, however, need to have a triangular roof. We live in a place that gets lots of snow, so this is definitely the smart choice. 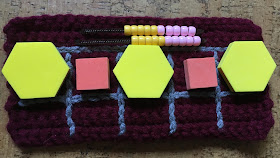 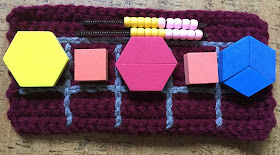 We also played guess my pattern. The first pattern I made was yellow/red and her first guess was about color. Great minds! So then I made hexagons composed of different shapes that alternated with squares. She guessed rectangle/square at first (pointing at the hexagons as she said rectangle) but I told her my rule was big/little. Kudos to her mom for not jumping in to say, "That's not a rectangle." during that conversation. Later when she described one of her patterns as rhombus/square, I told her I was impressed she knew the word rhombus and then said, "this pattern could be rhombus/rhombus" which got me a funny look. But then she was accepting of my explanation that a square is also a rhombus since both of them have four equal sides. She even grabbed the tan rhombus to include it in the pattern. She was all about precision - once I guessed a pattern was big/small and she said no, big/little. Here's another example of precision - take a guess what the pattern is before scrolling past the photo. 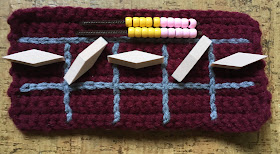 My first guess was flat/upright, she said it wasn't upright but sideways. I wasn't entirely sure what that meant and it took a few tries to get there. 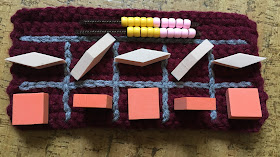 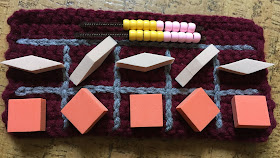 When she told me that my first guess was wrong her argument was about it not looking sideways from where she was sitting. Fascinating. The second photo was an acceptable match to her pattern (though it wasn't my second guess, I forget what my intermediate steps were). To note: we didn't talk about "red/yellow" patterns but described the pattern as red, yellow, red, yellow, red... while pointing to each shape. I wonder if identifying the unit of red/yellow would have resulted in more patterns with a consistent repeat. She made patterns that didn’t always repeat the same way (big, little, big, little, little). She also made a set of shapes that were increasing in size. Without any prompting she proved to me the square was bigger than the triangle by placing the triangle over the square and pointing to the parts of the square that aren't covered up. While I was appreciating that proof she moved on to the next thing so I didn't get to ask about the square vs. the rhombus. 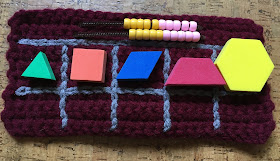 We played a wide variety of games during the afternoon (including a washer toss where she helped us keep score!) but she came back to the shapes several times, including eagerly nodding when I asked if I should take them out again after we'd cleared the table for dinner. It was fun to play with an older kid and compare to the toddlers. While we certainly didn't need a mat to make up patterns, it was nice to have - putting shapes on the mat was a signal that we were making a pattern so the other person was ready to pay attention.

FYI: The pattern blocks are a foam version from Hand2Mind (yay for conference giveaways!) I had a set of multicolor squares in addition to the standard pattern blocks which made it easier to test color vs. shape patterns. The felt shapes I usually use with the math play mats solve this problem too, but they don't invite building composite shapes in the same way that pattern blocks do.
Tina Cardone
Share